My Service Dog trainer contacted me a few days ago. She’s back in town for the summer.  She wanted to know if I wanted to keep training.

I had given up.  Training a service dog is hard work.  It’s even harder when you have a disability yourself.  It’s harder again when you can’t walk far, you’re mostly bedridden, and you don’t have a power chair.  I had decided it was impossible.

But Elke is very well behaved at home.  She walks beautifully at heel, she is calm and bomb-proof.  She ignores outside stimuli and focusses on me.  She allows me to lean on her, and she supports me standing up.  She isn’t flawless, but she has a good strike rate for the behaviours required to earn her Service Dog in Training jacket.  Her strike rate has to be 100%, however, and I had lost faith that this was even possible. 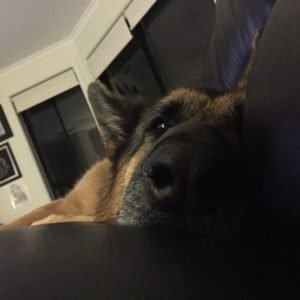 When I do take her outside, as soon as there is another dog around she forgets all the rules.  All she cares about is going to say ‘Hi’ and make friends with the other dog.  There is not an ounce of aggression in her, it’s all about the play.  Even though she is six years old, she’s a big puppy and always will be.  Once other dogs are around, I have no control over her. And I don’t mean that she is a danger, or will pull me over, or anything like that. She merely will not concentrate, will not listen, will not perform her tasks.  And that is not OK for a Service Dog.  These dogs have to conform to the highest standards of behavior and training. They are on par with a Guide Dog.

But I have put in months of work.  I have taken her to obedience classes. I have stood in the rain. I have endured a great deal of pain, just standing up through the hour long class.  I have put in hours of training with her, and she seems to have plateaued.  Worst of all, Elke seems to have lost interest.  And if she isn’t enjoying it, there is no point. I want her to remain my bestest couch buddy and I adore her regardless.

When D (my trainer) called I told her I had decided to keep training Elke for indoor tasks, but true training, and certification, would have to wait until either I make a miraculous recovery or I get a power chair, with a joy stick.  That will be eight months, minimum.

So she asked me if she could come over and see Elke and I.  That happened this morning.  Unbeknownst to me, she brought H, the owner of the charity who provides the training.  And they offered to assess Elke and I, and tell me straight where they think we’re at.

And Elke was great.  She messed up a few times.  I messed up a few times.   They corrected me, they corrected her.  But by the end of the 45 minute session, H was pleading with me to continue.  He told me she is a beautiful dog, with a temperament well suited to the work.  She and I are a well bonded team, and it was clear when he was working with her that she knew what to do. And she consistently tried to come back and ‘check’ with me.  He felt we have a good working relationship and that all I need is more confidence.  That she is more than three quarters of the way to her Service Dog in Training jacket, so far as he could see. That I didn’t realise how far we’d come already, and how close we are.  And it would be a terrible shame to give up now. 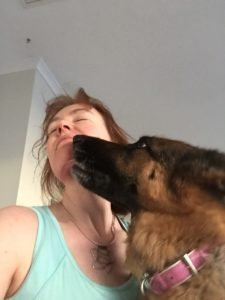 D understands how physically challenging this is, because she is a power chair user.  She suggested that I get a loan and get myself a power chair post haste.

H overestimated my physical abilities, because he doesn’t have a physical disability.  After 20 minutes I could no longer hold the lead, I couldn’t grip it.  I can train her to a waist belt, over time.  But training her is physically painful.  I do need to walk.  And my hands still can’t grip now, over four hours later.  I have been lying down since the session ended, because I walked for ten minutes.  Afterwards I was breathless and exhausted.  That ten minutes took all the energy I had for the day.  I was hoping I would rest and recover, but if it takes longer than four hours to recover from a ten minute walk, we have a problem.

And still, I agreed to keep training.  Because I was surprised by how well we really are doing.  I had lost perspective, in part because I was trying to do this on my own.  I NEED support from D.  And I want this to work.  I want Elke to be my Service Dog. I have put in so much work already.  I want her assistance. I may have to move into an apartment at some point, especially if things don’t improve from where they are now.  Normally dogs aren’t allowed, but a Service Dog is allowed anywhere.  No body corporate can refuse her.  She can come on holidays, stay in hotels, come into restaurants…she can even fly in the passenger cabin of most commercial airlines.

And she’s ¾ of the way to meeting the basic requirements to accompany me everywhere in public.  I want that.  I’m stubborn. I don’t give up easily.  Sometimes I really SHOULD give up…but I think this time its worth taking a deep breath, and persevering.

Living below the line and noodle cups and rheumatoid arthritis