I finally bought a medical ID bracelet.  This is something I have been meaning to do for literally years, but never got around to.  With my current fast prednisone taper, however, it jumped up on my priority list.  While the chance of going into adrenal crisis is still very small, doing a fast taper does increase the risk considerably.

The reason I didn’t buy one previously is my indecision over what actually needs to be on a medic alert bracelet.  I’ve talked to my doctors before, and some are blasé and say ‘You don’t need one’ and others list 33 different things that should be on there.

Go to a medic alert id website, and they will tell you to list everything.  Well, of course they do. They are in the business of selling the bracelets, necklaces and even subscriptions to keep a record of your health conditions and medications.  They aren’t an impartial source of information.

I do think those subscriptions are really quite a good idea, if you have complex medical conditions and multiple chronic illnesses.  But I’m too cheap to go there right now. 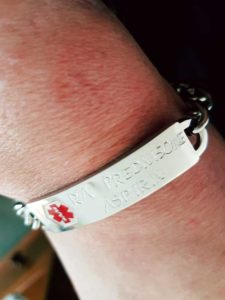 Even a basic bracelet is expensive, and even if you do it the el-cheapo way that I did (buy a basic bracelet on ebay, then get it engraved at the local engravers) it’ll still likely run you $50, depending on how much engraving you need done.  They charge by the letter, so shorter is better as far as I’m concerned.

I talked to my GP and broke it down to basics.  The reason the medic alert bracelet is there is to speak for you when you can’t.  If you’ve been in an accident, or are unconscious, to give emergency medical responders information that’s relevant to your treatment.

So, ask yourself.  Do you have any medical conditions that are likely to render you unconscious?  If so, make it easy on the EMTs and list it.

Do you have any medical conditions, or are you on any medications, that would change the way that first responders would treat you in an emergency?

Diabetics are often recommended to wear a medic alert, but I’ve been carted off in an ambulance, and watched other people carted off, often enough to know that they always check blood sugar first up, so they’ll figure that one out pretty quickly, with or without a bracelet.  Plus, I’m not diabetic, just pre-diabetic.  Probably a good idea to add it if you’re diabetic though.

I have hypertension, and that’s oft recommended as well, but again, they whack you on a monitor immediately and check your BP, so I don’t see that as essential for me.

I have angina, and heart disease, and a high risk of cardiovascular events.  I’ve had several TIAs and multiple small ischemic strokes.  But what do I write on a bracelet? Stroke risk? Heart attack risk?  Can’t see the point, because again, they find you unconscious, they stick leads on you and check your BP. They’ll figure out a heart attack or stroke pretty quickly on their own.  Bracelet isn’t going to do anything to help.

But, I am on blood thinners, or more correctly, anti-platelet therapy. Daily aspirin.  This is to lower my heart attack and stroke risk.  If I had a stroke and they pumped me full of more anti-coagulents or clot busters, I could bleed out. So knowing that I’m already on aspirin would be useful information.  It goes on the bracelet.

Remember, I’m cheap though.  And I’m trying to cut down on letters. I can’t see how it would matter in an emergency, so it doesn’t make the bracelet.  Steroids, on the other hand, are a different story.

Anyone who’s been on long term steroid therapy is considered ‘steroid dependent’ and in case of an emergency, their body wouldn’t produce extra cortisol. That could be the difference between life and death.  Additionally, when tapering steroids, the body can go into adrenal crisis.  You can pass out, go into a coma and die if no one recognises that you don’t have enough cortisol kicking around your body.  Cortisol is essential to life, and it’s a very easy fix.  So if you’re passed out cold and your bracelet says ‘steroid dependent’ that’s a pretty good clue as to why you’re passed out. And a simple shot of steroids could save your life.  So steroids gets a tick, and I’ve added ‘prednisone’ to my bracelet, to give the EMTs the hint.

I feel like I should explain why I’m on steroids, and “RA” is only two letters (still cheap)  so I’ve added that as well.  It might also help when I wake up and ask for pain relief.

I also have a bunch food of allergies, but I’m not allergic to any medications.  The only anaphylactic allergy I have is to seafood (crustaceans and molluscs), but that isn’t medically important. They don’t generally serve lobster in the ER.  There are contrast agents that have seafood in the ingredients, but I’ve had those safely in the past.  I have mild asthma, minor lung issues, but again, they whack you on a monitor, they see your pulse ox.  If your oxygen stats are low, they’ll give oxygen.  So no relevant allergies.

I don’t have any implants or stents or anything else that I can think of.  So that’s it.  RA, Prednisone and Aspirin.  That’s my medical ID bracelet.  Short and sweet.

Also, I chose a basic stainless steel design, not just because I’m cheap, but also because some of the more beautiful, bejewelled designs get overlooked in an emergency.  Many doctors are on the record for hating these things.  In an emergency, medical staff don’t have time to look closely at your jewellery. You medic alert bracelet should LOOK like medic alert bracelet.   Common sense to me.  But then, I’ve never been a fashion maven. My grandmother has better fashion sense than me, and she’s dead.

Function over fashion any day for me, but each to their own.  And all of this is all entirely my own (slightly sarcastic) opinion.  Each person’s medical conditions are different, and you should discuss your own particular circumstances with your doctors and ask if you need a medic alert bracelet and what you should put on there.

so what happened? I don’t know

Rheumatoid arthritis and packing for a (short) holiday