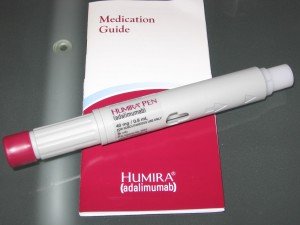 I haven’t really written about humira.  Just that I was about to start taking it.  Depression and other aspects of my life took over, and I didn’t blog for a while.  But I think I should fill in the gaps some.

I started taking it on the 13th November 2013.  I have now taken 5 shots.   Humira is a tnf blocker, similar to Enbrel, but it is a fortnightly injection, rather than weekly, like Enbrel.

As always, I didn’t read up on the side effects – I don’t want to curse myself.  I feel reading about the worst case scenarios can become a self-fulfilling prophecy.  I know the general risks with TNF blockers from my experience with Enbrel.

I took the first shot in the afternoon.

Within two hours I had a stomach ache, bloating, and nausea.  Not severe, but unpleasant.  Kinda like PMS, when the bloating and cramping is really bad.  My stomach looked almost pregnant, couldn’t do up my pants.  Ok, interesting…

The next morning I felt different.  Looser. There was still pain.  But I could move easier.  It’s really hard to explain.  I’d never really separated ‘stiffness’ from ‘pain’ before…but I guess I wasn’t as stiff.  I was still in a lot of pain, however.

By the afternoon  the pain was receding.  Now this IS odd.  Usually the pain is ramping up in the afternoon.  Instead, I was feeling relief.  Ok, that happens sometimes. Some days things just get better for no reason.  Don’t get too excited yet.

And I had energy!  I have never really considered my fatigue anywhere near as big a problem as my pain.  But that morning I realised how bad the fatigue had become. Because now it was cut in half! I didn’t feel like I had lead weights on my shoulders anymore.  I didn’t feel like a tyre was tied around my waist and I had to drag it around all day.  I didn’t feel that deep down exhaustion, and ache in my muscles.

Wow.  Starting to get a little excited here.

And then the anxiety kicked in.  As my energy levels increased, it turned to anxiety. And then to mania.  Over the next two weeks I went on a roller coaster ride of emotional turmoil that was unbelieveable.  I would swing from ridiculously happy (mania) to deep depression over the course of a few hours.  Fast cycling bi-polar.  Then I would swing up to hyper anxiety.  I was unable to leave the house. I had feelings of impending doom. I didn’t want to let my children out of my sight because I was convinced something awful would happen to them.   It was awful.

And the pain and fatigue returned after 4 days.

I called rheumy.  She said that sounded very unusual  (doesn’t it always???).  Considering methotrexate provoked a psychotic reaction that caused me to be hospitalised, she didn’t argue. She agreed that Humira can cause psychiatric effects and ‘mood changes’.  Mood changes was putting it mildly.

I agreed to continue.  After all, after one shot, it could have been a co-incidence.  I’m loathe to blame a drug for a reaction until I am really, really sure.

Next shot, 4 days of feeling good pain and fatigue-wise (and when I say ‘good’ I mean about 50% less pain and 50% less fatigue).  Which is pretty awesome.   Not even close to a ‘normal’ person tho. We are NOT talking pain free, remission status. Even for a day or two.

And the anxiety returned.  I called it the bi-polar express.  That Friday (after my Wednesday shot) I sat in my living room alone. My kids had gone to school.  I was convinced that someone was coming to ‘get’ me. Do me harm.  Something. I was terrified. Genuinely terrified.  I knew it wasn’t real, and so I could logic through it, to an extent. But the feeling was very real.  And it was not a nice feeling.

I kept checking the house, the doors, windows, making sure they were locked.  I had to check all the cupboards to make sure no one was hiding in there. I checked the man hole periodically because someone could be in the ceiling and climb down into the house that way.

But I knew it wasn’t real.

Persevere.  I wanted to stop Humira. I hated it.  But this time it only lasted a week. The anxiety abated.   It was getting better.  And the relief I felt (pain and fatigue wise) was amazing.  I hoped that the improvement in pain and fatigue would continue, and would last longer.  And the anxiety and depression would improve and get shorter.

That was the trend.  It was sound logic.

But the last shot I took, a week and a half ago, gave me NO benefits whatsoever.  It DID give me four days of bipolar madness.  Not only did my pain and fatigue not improve, I went into one of the worst full body mega flares I’ve EVER had.

It really knocked me down.   Physically my world stopped.  Luckily I had some friends to help.  Emotionally it hit me hard.

With every drug, there is a moment when you realise it doesn’t work. Its not going to work. Another treatment option failed.  Gone.

I had that moment with Humira last week. The chances of it helping now are very slim.  I will ofcourse continue.  My three month appointment with Rheumy is in four weeks.  So I will have two more shots between now and then.  Two more chances for Humira to do something wonderful.

Humira is particularly hard to let go, because those first four days is the best I have felt in many years.  By far the best reaction I’ve had to any drug or treatment.  It gave me hope on a level that I haven’t felt before.

So when I crashed, I crashed hard. There were many tears. It was ugly.

But it was beautiful, because a friend came over and held my hand and listened to my cry and stayed with me.  Also a new experience for me.  She helped me through.  And now I am accepting that humira probably won’t work and it is time to move on.

Unfortunately, rheumy will want me to do the full six months.  I don’t see the point.  I really can’t see that once a drug has given you some improvement, and then that improvement stops or ceases to happen, that its going to suddenly start working again.

I have read about humira not helping for up to six months, and maybe that’s worth waiting for.  But I don’t think it’s a ‘start/stop’ thing. I think once the ride is over, its over.

Possibly the scariest idea of all.

Four more weeks to think it through.  Still hoping for a miracle.  Can’t hurt to hope…

Endocrinologist consult, May 2018. Or months of waiting for a...