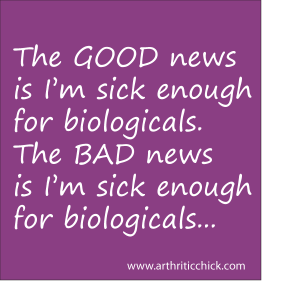 The good news is, that rheumy has decided I am sick enough for biologicals.

At my appointment today I held nothing back.  I told her exactly how rough life has been lately.  How much pain, how much disability, how much fatigue I am experiencing now that I am down to 10mg of Prednisolone.

She still holds out some hope for Arava, but now that I’ve had to reduce my dose of leflunomide to 10mg, due to elevated liver enzymes, it could take up to six months to see benefit.

I have been taking it for four months.  The idea of living like this for another two months, hoping for an Arava miracle, does not appeal.

Waiting for something to work for me.  Five long years of daily pain.  I have to admit, I am luckier than some…some days are only mild.  Most days are moderate.  Some days are severe, complete incapacitating.  What I call full body mega flares.  Or a knockdown day.

I think it’s fair to say that at this point I am experiencing some depression and loss of hope!

So we talked through my entire history, all the medications…plaquenil, sulfasalazine, methotrexate, imuran and pretty much every nsaid under the sun. Several years of ‘just give it another 3-6 months to work’.

Remembering that I have only been seeing new Rheumy for a few months.  I saw Old Rheumy for five years.  And Old Rheumy is a good rheumatologist.  He is just incredibly overworked in a highly stretched Australian Public health system.  Anyway, that’s too complicated and political to get into here.

New Rheumy listened.  And she is a really sympathetic doc.  She is honest, and open about her reasoning, and very good at explaining the facts in a non-emotional, but still caring, way.

And then she started to explain the criteria for biological drugs to me.  And why I don’t qualify.

As we talked it through some more, I was able to (very respectfully) ask questions, and give her timelines and facts which showed that I do in fact qualify.  Or I just *might*.

And then she said she would ‘just give it a try’ and put in an application, and see what happened.  I nearly cried.  As I’ve said before, I’m not a big crier.  But I felt teary.  I tried to hide it.  I didn’t want her to think I was nuts!  But it means that much to me.

The criteria are basically this.

You need to have severe, active rheumatoid arthritis.

You need an active joint count of at least 20 active (swollen and tender) joints.  OR at least four major active joints: elbow, wrist, knee, ankle, shoulder and/or hip.  Easy as.

You need to have failed a six month intensive treatment with a minimum of two DMARDs (at the same time)  AND have failed methotrexate at 20mg.

This is awkward. I have failed methotrexate convincingly at 10mg.  My body cannot tolerate a higher dose than that.

You need an elevated CRP or ESR.  My CRP has only been raised high enough once.  My ESR has been elevated a few times…but it’s not right now.  Last time it was elevated, I had been feeling better than I had in months.  It’s a problem for many people.  Up to 30% of people have completely normal inflammatory markers, and yet have active, severe rheumatoid arthritis.  Go figure.

So you see it’s a little dicey.  My bone scans and ultrasounds which show active inflammation do not count to medicare.  I believe this is very wrong.

But these are the rules.  Will I pass the criteria?  I don’t know.

For all I know it might come down to the mood of the person who assesses my application on the day.

But as rheumy said, we can only try.

And its worth noting, that if I hadn’t educated myself on the critieria, I would not have been able to argue my case with my rheumatologist.  While getting this information was so difficult, I almost felt it is purposefully *hidden*, I did find the information, and I did use it to my advantage.  An example of knowledge is power, and we all need to educate ourselves on our illness, as well as potential treatments, and the pathways to those treatment options.

And in the meantime, I have hope again.  The depression has lifted.  A reprieve, if you will.

I need a break, but…